Organically Made & Powered by the Sun: Meridan Hill Maple

Allen Bouthillier has always had a love for maple sugaring. He was introduced to maple syrup as a child by Harold Ball, who had a sugarhouse behind his house, used buckets to collect sap and a wood fire to boil. Allen was also very familiar with Meridan Hill, since he picked potatoes from the age of 10 and basically grew up there. He learned how to drive when they baled hay and loaded it onto the truck, which moved along in creeper gear with him behind the wheel. Milton Paradis’ family had a farm up there, and Allen said as a young man, “If you’re ever interested in selling the farm, I would like to buy it.” As time went on, Allen stayed in touch with Milton. Eventually, he called Allen to ask him if he was still interested in buying the farm, and thus Meridan Hill Maple Farm came to be. Allen also knew the property abutting the Paradis farm, owned by Roland Dupont, had plenty of maples. Years later, he bought the land from the Duponts. He worked on a sugaring plan with a forester and spent three or four years going to different sugarhouses, manufacturers and installers to get ideas. His son Kory was also interested in maple sugaring and is an equal partner in the operation. 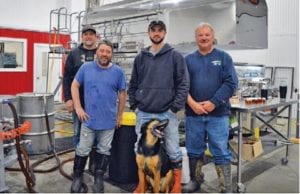 In January of 2018 the current building was not even in place, but two months later the first barrel of syrup came off line. The building came from a salvage job that Allen had completed a few years earlier in Littleton, and which he was able to repurpose. Allen’s first thought was to lease the sugar lot out, but he was advised it wouldn’t be viable, so he decided to get into sugaring himself and to go organic. “Today’s consumers want to know what is in the product,” Allen said. “Our product is USDA-certified and free from all synthetic additives like pesticides, cleaners and dyes. Our syrup is made in single batches, bringing out a robust flavor as nature intended. It is never blended.” There are 19,500 taps this year, and there is plenty of room for expansion. “We produced 8,500 gallons last year, and it was a good year,” Allen said. “This year the drought could affect production. The sugar content is way low.” Meridan Hill Maple Farm has 10 miles of two-inch lines, 24 miles of one-inch lines and 260,000 feet of 5/16-inch lines. Compared to how Allen was first introduced, the maple industry has grown by leaps and bounds. “We can monitor everything by phone, whether it be the woods, the tanks, vacuum, temperatures or tank heights,” he said. “Our evaporator is oil-fired and has the capacity to make 150 gallons per hour.” The operation uses equipment made by CDL, Dominion and Grimm, and M.E.S. The facility is powered by a solar array that yields 55 kilowatts and provides everything except demand power and offers huge savings. Meridan Hill Maple is also making maple candy and maple sugar, and has fermentation tanks where sap will be saved to make maple vinegar at the end of the season. “The market for our product is expanding more and more,” Allen said. “We are selling in Kentucky, Alabama, Tennessee and Florida. as well as New Hampshire and Vermont.”

This sugarhouse isn’t the only thing that Allen has planned for the farm. He’s put up a 32-by 70-foot greenhouse, and he lit up as he talked about it. “I also want to grow blueberries, have an apple orchard and a pumpkin patch,” he said. “I want to make this a destination.” The sugarhouse includes a small store, offering product along with souvenir shirts. Meridan Hill Maple Farm has had visitors from all over the state this spring—the facility follows all CDC guidelines—and can be found on-line at www.meridanhillmaple.com and on Facebook.